Questions 7 to 8 below are based on this passage:

The discoveries of the white dwarf, the neutron star, and the black hole, coming well after the discovery of the red giant are among eh most exciting developments in decades because they may be well present physicists with their greatest challenge since thefailure of classical mechanics. In the life cycle of the star, after all of the hydrogen and helium fuel has been burned, the delicate balance between the outer nuclear radiation.pressure and the stable gravitational force becomes disturbed and slow contraction begins. As compression increases, a very dense plasma forms. If the initial star had mass of less than 1.4 solar masses (1.4 times the mass of our sun), the process ceases at the density of 1,000 tons per cubic inch, and the star becomes the white dwarf. However, if the star was originally more massive, the white dwarf plasma can’t resist the gravitations pressures, and in rapid collapse, all nuclei of lthe star are converted to a gas of free neutrons. Gravitational attraction compresses this neutron gas rapidly until a density of 10 tons per cubic inch is reached; at this point the strong nuclear force resists further contraction. If the mass of the star was between 1.4 and a few solar masses, the process stops here, and we have a neutron star. But if the original star was more massive than a few solar masses, even the strong nuclear forces cannot resist the gravitational orunch. The neutrons are forced into one another to form heavier hadrons and these in turn coalesce to form heavier entities, of which we as yet know nothing. At this point, a complete collapse of the stellar mass occurs; existing theories predict a collapse to infinite density and infinitely small dimensions Well before this, however, the surface gravitational force would become so strong that no signal could ever leave the star - any photon emitted would fall back under gravitational attraction – and the star would become black hole in space. This gravitational collapse poses a fundamental challenge to physics. When the most widely accepted theories predict such improbable things as infinite density and infinitely small dimensions, it simply means that we are missing some vital insight. This last happened in physics in the 1930’s, when we faced the fundamental paradox concerning atomic structure. At that time, it was recognized that electrons moved in table orbits about nuclei in atoms. However, it was also recognized that if charge is accelerated, as it must be to remain in orbit, it radiates energy; so, theoretically, the electron would be expected eventually to spiral into the nucleus and destroy the atom. Studies centered around this paradox led to the development of quantum mechanics. It may well be that an equivalent t advance awaits us in investigating the theoretical problems presented by the phenomenon of gravitational collapse. 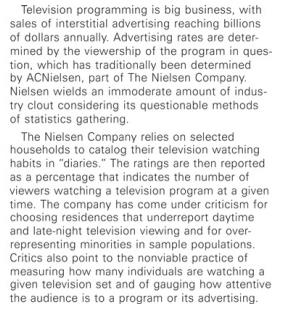 1. The primary purpose of the passage is to

2. According to the passage, in the final stages of its devedlopment our own sun is likely to take the form of a

3. According to the passage, an imbalance arises between nuclear radiation pressure and gravitational force in stars because

4. The author asserts that the discoveries of the white dwarf, the neutron star, and the black hole are significant because these discoveries.

6. The author introduces the discussion of the paradox concerning atomic structures in order to

7. It can be inferred from the passage that the author considers the Nielsen Company’s techniques

8. Consider each of the choices separately and select all that apply.
Which of the following does the passage indicate is true of the household members who report their viewing habits?